The following article was first published by the Kanner Jugend Telefon (KJT) as part of their BOD campaign (November 2017). A version of this article also appeared most recently in the Luxembourg Times.

In Luxembourg, like many of it’s bordering countries, alcohol is used widely and is present at nearly all occasions from family celebrations at birth to school fêtes and business lunches to retirement parties. It is a socially acceptable drug that most people consider to be fairly harmless despite restrictions for it’s selling and consumption for children under the age of 16 years old. This is why children and young people can be confused by what they are being told about alcohol and what they experience in the adult world around them.

Today most responsible parents and adults who work with children, especially teenagers, want to talk to young people about using alcohol; the good, the bad, and the ugly, but it is very hard to know where to begin. Even if you do not drink alcohol regularly it is likely that your child will come into contact with it outside the home. Therefore all young people need some guidance around alcohol and how to look after themselves.

Alcohol affects the way we perceive the world. For most people one drink will make them more relaxed, less inhibited and possibly more sociable. But a lot to drink at one time, or continued use without a break, can lead to serious problems. Whilst under the effects of alcohol young people are more likely to take risks, have accidents and get into social situations that they may later regret. As adults we generally know these risks by experience, and yet as a society we are still unsure about how to talk openly about them. Added to this, young people often see adults as role models and will tend to act on what they see rather than what we tell them. If parents or other responsible adults are telling them not drink alcohol but are regularly and openly drinking in excess themselves then their message becomes contradictory and may even have a negative impact.

There is no doubt that teenagers and even pre-teens may feel pressured to drink because they want to fit in with their peer group. This type of pressure is often misinterpreted because they want to drink because their friends are doing it and not necessarily because their friends are making them do it. This is an important part of the change that happens in adolescence when peer groups often have more influence than parents over teen behaviour. They want to feel accepted, they want to feel good about themselves in the middle of this challenging time, and alcohol can seem to be the answer. But without support and guidance this behaviour can become a form of escapism.

The best advice for parents is to be open about alcohol and it’s effects both positive and negative. If you drink alcohol in the family try to always have food at the same time. This is important because eating before or while you are drinking slows down the effects of alcohol and makes it easier to make a judgement about having another drink. Also encourage them to drink water in between alcoholic drinks. This can be tricky when you can only buy water in bottles in Luxembourg. Why not suggest a reusable water bottle that can be carried discreetly in a bag. Talk to children and young people openly about why you drink alcohol. If you don’t drink it is just as important to talk about this subject because they will come into contact with other young people who drink eventually. If you do drink you might like to compare it to their favourite food or a sweet treat like chocolate.

Everything is OK in moderation. If your child is older and you suspect he or she is drinking outside the home try to encourage them to talk about what they are drinking, with whom and where. Remind them that different forms of alcohol will have a different effect and the drinking environment will also have an influence on that effect. Teach them about keeping themselves safe, staying with trusted friends, and how they are going to get home afterwards. It can be helpful to ask teenagers what they would do in imaginary scenarios that include either themselves or their friends drinking. Practicing what they would say or do, building their confidence in their ability to handle these situations is a valuable skill. And be prepared to allow your child to always fall back on using you as an excuse, after all blaming your parents for insisting that you are back home by midnight has always been the best escape line in the book. 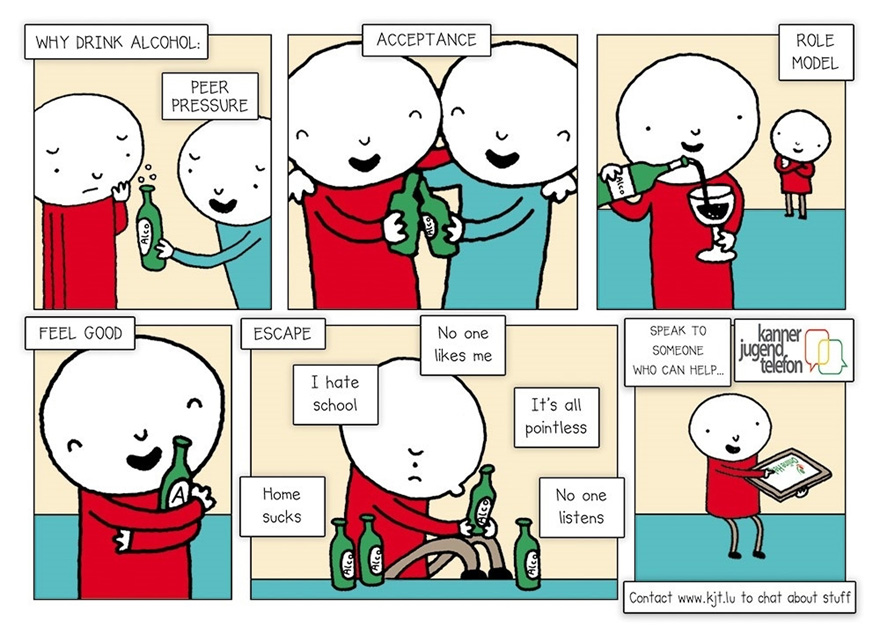 The Kanner Jugend Telefon (KJT) Parents Online Help or the KJT Children & Youths Online Help service can offer information, advice or just a non-judgmental person to talk. If you or your child would like to talk about this or any other subject confidentially and anonymously contact: www.kjt.lu