INTERVIEW: From Tiny Seeds to Tall Flowers – The Growth of Sunflower Montessori in Luxembourg

This is the first in a series of articles where we interview some of the professionals from our Passage Professionals Network. We wanted to know what brought them to Luxembourg, why they chose their profession, and what plans they have for the future. 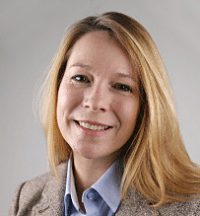 Sam O’Dea the joint Director of Sunflower Montessori Crèches and Foyer du Jour has lived in Luxembourg for 23 years. She brought her passion for Montessori education from London and opened her first crèche in 2001.

What brought Sam to Luxembourg, and why did she then decide to open a ‘Montessori’ crèche?

Sam came to Luxembourg with her boyfriend (now husband!), who already had a job offer. At the time there was no Montessori education in Luxembourg and very little focus on children’s needs before primary school. Sam had been working as a nanny and then a vice principal of the Rainbow Montessori school in London. At first, as a nanny, she had been rather skeptical of the Montessori method developed by Maria Montessori in 1907. This method is based on the belief that there are sensitive periods in a child’s rapid development in the pre-school period 0-6 years. In these sensitive periods a child has the capacity to learn new skills needed to look after themselves, interact with their environment and develop their curiosity at an enhanced level, which creates a strong foundation for later learning. Maria Montessori created a classroom environment and special materials to help children in this process, but as each child is different they get to work at their own pace. Montessori-trained teachers act as a guide for the children but are completely child-led.

Sam met the principal of Rainbow Montessori in London and not only saw first hand how it worked but fell in love with the Montessori method, and after moving to Luxembourg decided that she wanted to start a Montessori School here.

So her dream started with a Montessori School so why did she start with a crèche?

When Sam arrived in 1994, she started working at the Magic Balloons Crèche in Findel where she slowly started introducing her homemade Montessori materials and ideas into the classroom. As her colleagues saw how well it worked they became curious and so the idea spread. Subsequently Sam was soon joined at the crèche by her childhood friend, Helen Clarke.

When the owners of the Magic Balloons Crèche decided to sell, it seemed the obvious choice to take over the business along with Helen. Together they both launched the first Montessori crèche in Luxembourg – and so the Sunflower Montessori Crèche was born.

At the time Sam had two young children – as did Helen – and she recalls those early crazy years for them both, juggling between being teachers and often having 4 children in the back of the car whilst running the business! Within 7 years the waiting list at Sunflower was so long, they needed to expand the business and decided to open a second premises in Moutfort in 2008. However plans for opening a school at that time had to be shelved because of the ever-increasing demand for crèche places.

Sunflower Montessori also run a successful Saturday school for children usually to 4-8 years old. What is the purpose of these sessions? 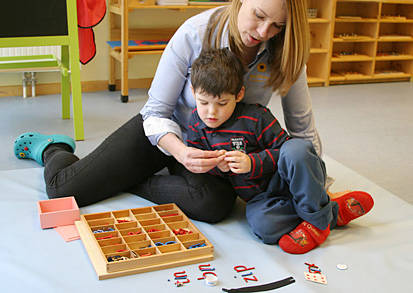 Children enjoy learning to read within this window (one of the ‘sensitive periods’) of their development. By using the Montessori materials and the method, they are given an introduction to their letters and sounds, through various activities including singing and story telling, in a relaxed environment. Children are encouraged to explore and feel proud of their achievement at their own pace.

Do children need to come from English-speaking families? Can you teach non-English speaking children to speak/read in English?

As is usual in Luxembourg, children come from all different cultures and often have more than one language in their households or school settings. This is not a problem for this method. The sessions are child-centred so we move at the child’s own level and pace.

So what are the plans for the future?

Sunflower has recently been granted a license to care for children up to 12 years old after school (Foyer du Jour) and in the holidays. This is a very exciting development as many parents like their children to have after-school care in a relaxed and stimulating environment and lots of these children have already attended the Sunflower crèches. At present transport is provided for many of the English-speaking schools for this service. As they also accept the government’s Cheque Service this makes it a popular choice for parents.

This is a large age range, how are you going to cater for the differences between children age 4+ and 12 ? What about different languages?

We expect to grow with the group, in true Montessori method the older ones will be encouraged to take care of the little ones, although the ages will be generally split. We have a mixture of staff including primary school teachers, a social worker and psychologists separate to support this move. For after-school there will be someone there to help with homework (English, German & French-speaking) and there will also be activities for the older kids. Everything about the Montessori classroom is available to the children and they do not necessarily need a teacher to lead. This is especially good for older children as they often miss out on self-directed learning and play as they grow up in more traditional educational environments. During the Summer there are large gardens to play in and organized trips to farms, parks and forests, and places in their community. There are also hands-on activities like baking. Children are encouraged to take part in deciding what they would like to do as joint activities.

A mix of languages is not a problem for the Montessori approach, we should not be afraid to expose our children to many languages. They are after all just words /symbols. In this method children learn what an apple (the concrete) is by using all their senses before learning the different words for it (the abstract).

Is there anywhere where parents can find out more about the Montessori method?

Unfortunately schools or crèches who call themselves Montessori are not regulated in any way, and because this approach has become so popular now, often it is used to sell but not strictly followed. The Montessori method is about putting the child in the centre of their experience of learning, it’s about trusting, respecting and understanding the ‘sensitive periods’ in an individual child’s development. The Montessori classroom has specific materials that are sensory-based, practical and available to them. So they can choose an activity and follow their own instincts. There are several official Montessori websites you can visit for more information but most importantly ask to observe a classroom at work and play.

So what about opening a Montessori School for Primary-aged children in Luxembourg?

It was the original plan, so when the time is right.

Absorbent Minds: Two short films that give an introduction to Montessori education and the Montessori classroom.

Interview by:  Lynn Frank who is a coordinator for Passage.